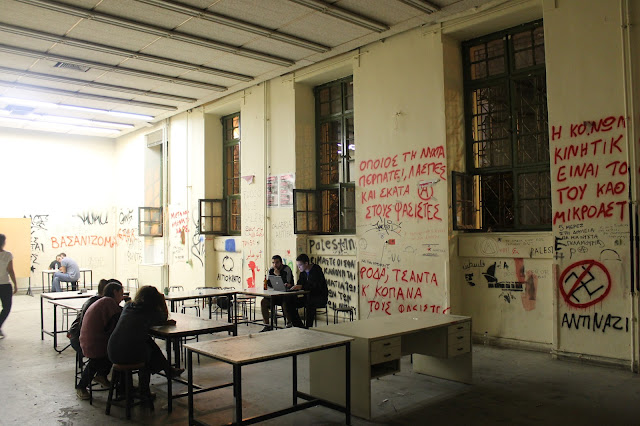 We have problems with the internet at the youth hostel – I guess I can't blame the Troika for this! ;-) The blog will be updated very soon, don't worry. Anyway, today was again a very busy day. We had a very long discussion with Panagiotis Grigoriou (3 hours), who showed us the tree on Syntagma where Dimitri Christoulas shot himself in the head in April. New Democracy removed all traces of solidarity from the people, and the obedient media doesn't mention the huge number of suicides anymore.

One important message he gave us is that "when society is violently destroyed like this, when defeats in social struggles are followed by defeats in the elections, it is NOT easy AT ALL to keep on fighting, and to keep hope alive." So one lesson we can learn from Greece is that waiting until people have suffered enough and hoping that Le Grand Soir will come on its own is completely stupid, irrelevant and naïve. We have to fight right now in Beligum, not wait until people can't even afford to have a cup of coffee in a bar. Even sociability, essential for the resistance, is now in danger in Greece.

Then we went to Radiobubble, passing on our way in front of a bus full of policeman with machine guns, to see the "without label-autonomous" comrades. We were quite surprised by some of their statements, like for example: "When fascism grows, antifascism naturally grows too. It's action and reaction!" And "Golden Dawn could be in the government, it's not a problem: they'll eventually disappear, just like the Laos before them." And also "There is no left and no right: only the people on one side, and the corporations on the other. No matter your political opinion if you suffer from the crisis."

But they also reminded us that the bulldozer of austerity will also destroy the environment, like in Skouries, where activists are again under trial following violent repression from the state.

The most impressive for me was when we arrived @ the Athens Polytechnic. The walls were full of leftists slogans – on the outside of buildings, on the inside, and even in the classrooms!!!

And then, in a very hot auditorium, we attended to the monthly meeting of the student's union, composed mostly of leftists from Antarsya. There were more than 200 students in there, and amongst them our comrades from OKDE-Spartakos :-) ! 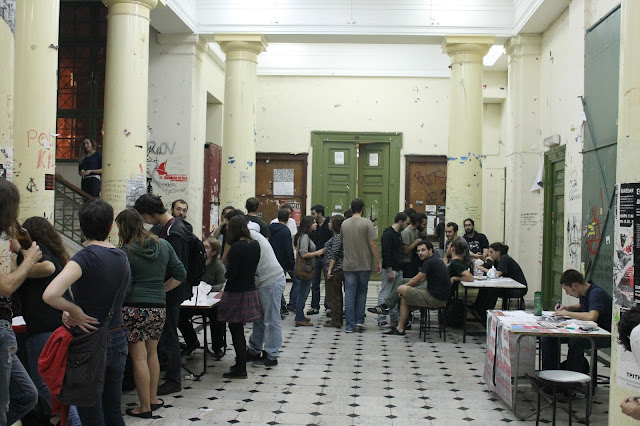 Although it had begun at 8 pm, it was supposed to last until 3 or 4 am!! By that time, there will only be about 30 people left to make decisions. I guess the Greek comrades still have to fight to put time limits on the speakers: it's a practical but also a democratic question.

A funny thing: we discovered that among the 30 or so leftists currents in Greece, there's something I never heard of before: the "Althusserians". I still don't get exactly what it is, but maybe we'll have more information later.

After the brave and applauded intervention of Alexandra and Neal in the name of our delegation, we decided to leave – it was close to 1am. 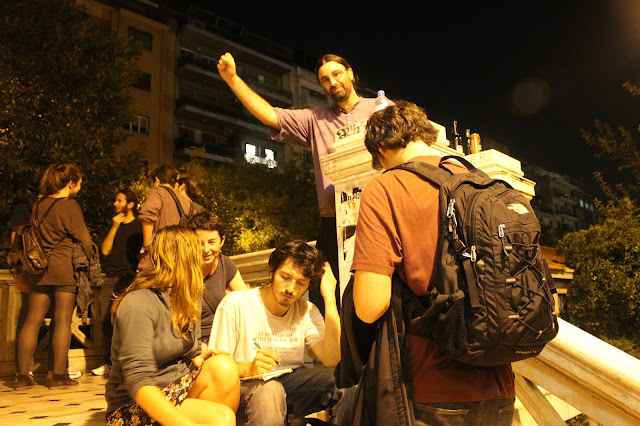