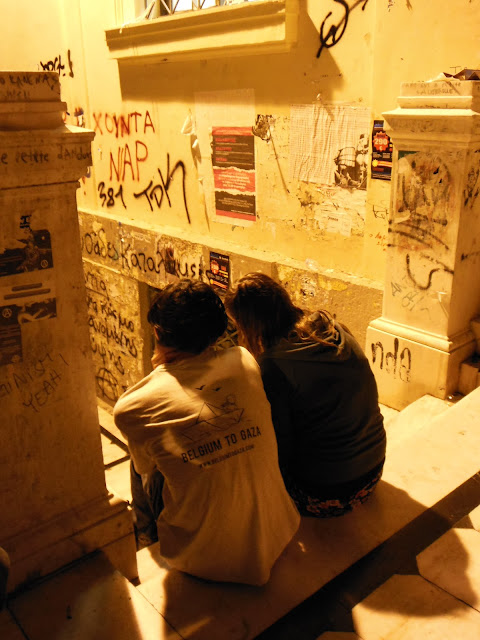 We're students and political militants from Belgium and we're here in Greece for one week to learn from, support and participate in the resistance against the crisis of capitalism.

This crisis is also getting clearer in Belgium. It's the crisis of the neo-liberal answers to the crisis of the '70. In Belgium it led to the crash of big banks, which were saved with public money, which in turn increased the public debt.

The government chose to make the people pay for the crisis.

They started to apply austerity measures, beginning with the freezing of wages and attacks on pensions and the unemployed.

Because the government didn't even want to talk with the labor unions, they declared a 24-hour general strike in January of this year. But once the dialogue with the government was re-established, the union leaders didn't want to go further in the struggle.

The student movement in Belgium is not yet as big as it is here in Greece. You can tell just by looking at the graffiti/political slogans on the walls of the university buildings – even in the classrooms! But we do try to organise struggles to preserve public education.

We are fighting to preserve public student housing against privatisation.
We are struggling to keep public transport as cheap as possible.
We are fighting against the raising of tuition fees for foreign students.
We also supported the occupation of university buildings by 'illegal' inmigrants.
They started a hunger strike in order to obtain legal documents.
To stop the violations of International Rights of Israel against the Palestinian population, we push for a boycott of the scientific exchange programs of our university with Israeli universities.

Of course, while leading these and other struggles, we're being confronted with repression by the State. Not only with police violence, but as of this year, fines too.

Nevertheless, this will not stop us.

The 14th of November 2012, there will be strikes and actions.
We want to encourage all of you to continue the fight and we will do the same in Belgium.

In the end, we know that there is only one choice: socialism or barbarism.
We've made our choice - now you do the same. 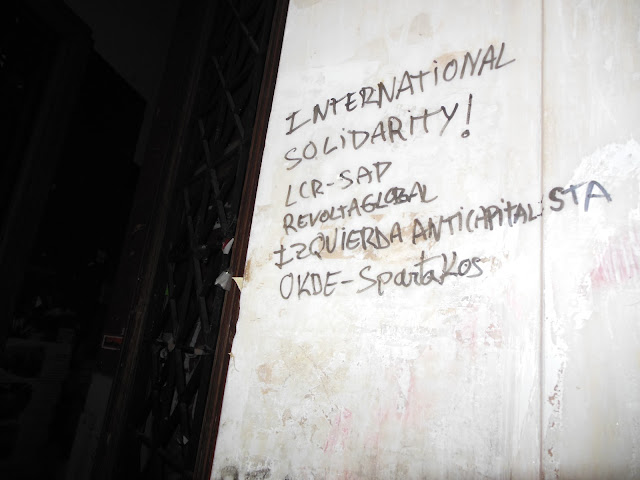